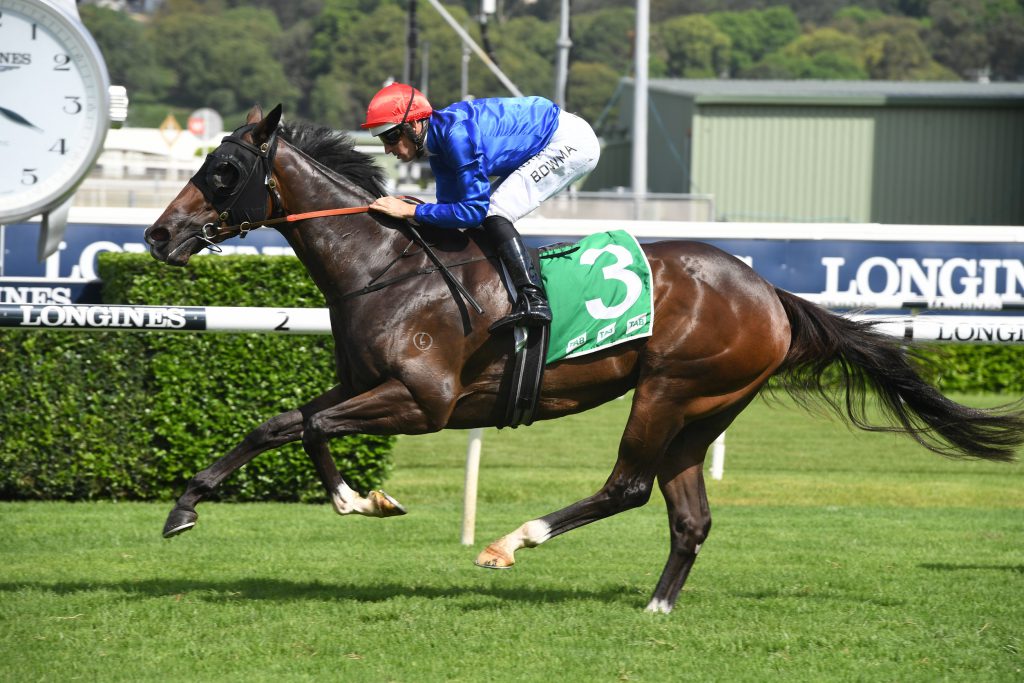 There’ll be plenty of thinking going on at Godolphin HQ about how they tackle the $7.5m Golden Eagle at Rosehill on October 31 after both Flit and Criaderas made compelling cases at Randwick on Saturday.

Group 1 winner Flit upset the Eagle favourite Alligator Blood to take out the $500,000 Silver Eagle (1300m) while the lightly raced Criaderas made it four from five in the Drinkwise Handicap (1400m).

Trainer James Cummings said there is a Group 1 option in Melbourne for Flit but as she’s already a Group 1 winner the Golden Eagle holds appeal.

While with Criaderas the consideration is whether to ask him to take on Group 1 winners when his rating is in the low 80s.

“Criaderas clearly has a big future. He has a great finish, we’ve been patient with him and he is rewarding us,’’ Cummings said.

“We have our feet on the ground with him, Criaderas hasn’t done what Flit has done and he could be one of those classic older, gelded, Godolphin gallopers that races through the grades and he could be a very good handicapper for us.

Cummings’ main concern with Criaderas is the 7kg turnaround he’ll have against him compared to Bottega, who ran a luckless third behind him, in the Golden Eagle and the presence of Coolmore’s international galloper Wichita.

In the Silver Eagle, Rachel King on Flit stalked Alligator Blood and was able to sprint better than the boom Queenslander, though he responded when she loomed up, while Dawn Passage claimed third.

TAB reacted by easing Alligator Blood to $4.50, firming Flit to $9 while Criaderas is an $11 chance.

“It’s not completely straightforward, the next couple of weeks we’ll have a much better idea exactly where she will be,’’ Cummings said of Flit.

“It was great to see her back on track and I am sure she will run well in anything we set her for.”

“Flit had the sitting shot at him and she will be very hard to beat in the Golden Eagle,” Vandyke said.

“He was pretty spot on today so I think just the fact he will be third-up, it is only three weeks between runs, and out to 1500m will make some difference.

“Whether we can turn the tables on Flit remains to be seen, it was a very good win and she ran straight past us.”

Meanwhile, leading Perth owner Bob Peters said he will consider the Golden Eagle for Windstorm after his win at Caulfield on Saturday.

“I will see how he pulls up and check the logistics,” Peters said.

What the beaten jockeys said:

Tim Clark (Dawn Passage): “He found the line nicely first up. Got a good bit of improvement to come.”

Nash Rawiller (Chat): “Super run. He jumped really well and was forced to take it up. He gave a really good kick against those good horses. Stuck to his guns really well.”

Tommy Berry (Subpoenaed): “Just coming back 100m in trip and she wasn’t quite as sharp today and the 1500m will suit her. She warmed up late and not beaten too far.”

Regan Bayliss (Icebath): “She sprinted at the top of the straight but was left flat footed. Once she got balanced up she was good through the line. It was a pass mark.”