Eagle Tailor Made For O’Callaghan’s Superman 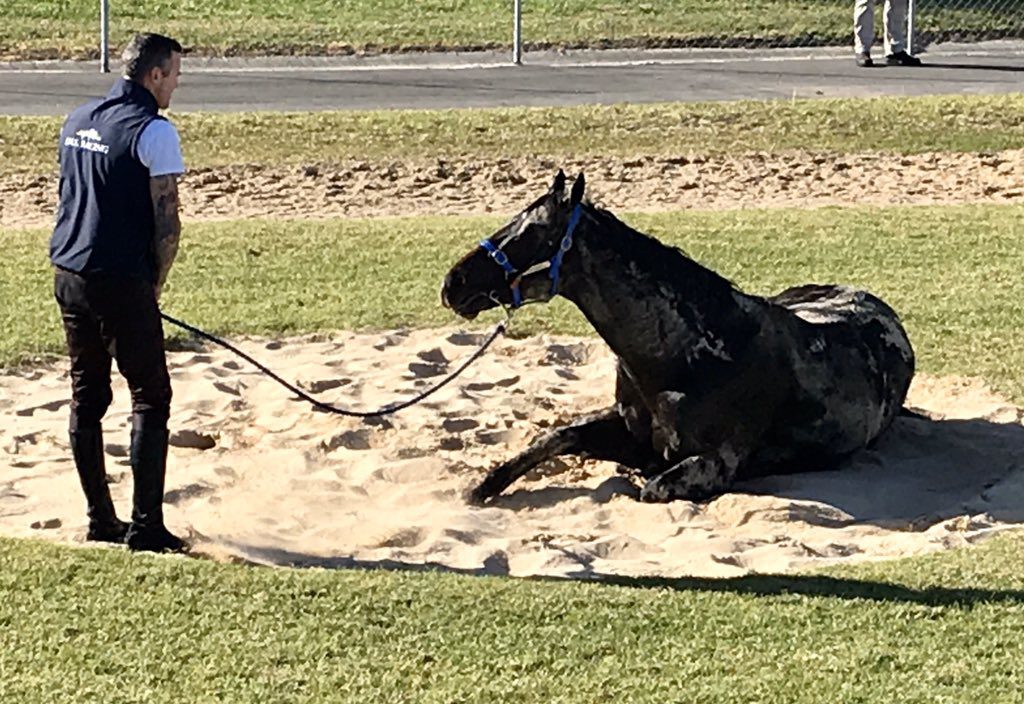 It sounded too good to be true.

Young Irish trainer Michael O’Callaghan listened intently as this new rich race on the other side of the world was pitched to him.

Exactly how long it took the Australian Turf Club’s James Ross to sell the $7.5 million Iron Jack Golden Eagle (1500m) to the 31-year-old isn’t clear but I Am Superman arrived in Sydney some six weeks after their meeting despite his rating putting him outside the 18 field limit at the time.

O’Callaghan won’t have confirmation of his place in the race until the field is declared on Tuesday but he says I Am Superman will love Australian racing.

“I couldn’t believe my ears when he was telling me about this race, seven and a half furlongs around a turn which is made for our horse,’’ O’Callaghan said.

“All his best runs are around the bends, he likes good ground and I thought the race is made for him.

“I think Australian racing in general will suit the horse better.’’

I Am Superman is one of three international visitors for the inaugural Golden Eagle at Rosehill on Saturday – Aidan O’Brien has sent Never No More while Richard Hannan’s represented by Beat Le Bon.

O’Callaghan has known about the race for two months now but still marvels at the $7.5 million carrot his horse will be racing for and is certain more northern hemisphere trainers will want to target the race as it evolves.

“It’s the first year and it’s caught the imagination of an international audience and you can imagine it will only go from strength to strength,’’ he said.

“It’s a race that will suit a lot of milers and horses from up here.

“The Australian sprinters are the best sprinters in the world and it’s hard to go into their back yard and beat them.

“But up to a mile it will open up the race to be a proper international race because across the board milers are fairly equal over the world.

“It’s a great idea and it shows the strength of racing in Australia that you are able to get such prizemoney together for two races a couple of weeks apart.

“There’s a lot of talk about the Australian racing industry over here in Ireland and this race is just an example of it.’’

A look at I Am Superman’s form shows he has a good deal of quality about him.

He’s won three from 10 with two placings and he followed an easy win over 1408m at Naas with a game third behind Madhmoon in the Group 3 Desmond Stakes (1609m) at Leopardstown on August 15 (below).

Madhmoon had split Anthony Van Dyck and Japan in the Epsom Derby at his previous start and was runner-up to Never No More back in April which is interesting from a Golden Eagle point of view.

O’Callaghan is adamant his horse is capable of competing at Group 1 level, which he will need to prove on Saturday, especially on a flat track around a turn.

“We don’t have a lot of that type of race and when there is one they are Group 1s and you’re taking on Aidan O’Brien every day,’’ he said.

“If you’re not taking on Aidan O’Brien you’re taking on something like Madhmoon in a Group 3 after running second in an Epsom Derby which is a bit tough.

“He had to commit off the bend early to try to get a run on Madhmoon and he had him beaten at the furlong pole. Even with 100 yards to go he was still there and he just got caught.

“A mile around Leopardstown is a stiff mile in comparison to anything you’d have down there.

“We ran him in the Irish 2000 Guineas when he was still an unfurnished three-year-old. We rode the race thinking Aidan O’Brien’s four other runners were going to set up the pace to be strong to suit Magna Grecia.

“As it turned out it didn’t happen, they just sat back and watched and it ended up being no pace and Phoenix Of Spain stole it.

“We sat far back and he did really well to finish sixth and beside Magna Grecia who won the English 2000 Guineas.’’

O’Callaghan trains his team of around 40 at The Curragh, among some 1500 horses at the Irish training mecca.

He grew up in County Kerry and is not from a racing background but ‘got the bug’ at around 15 when he went to work for a national hunt trainer then learned the ropes with Coolmore and is a graduate of the Irish National Stud.

He’s been training for about seven years and rates his highlight as the weekend he trained Group 1 placegetters in both the 1000 and 2000 Guineas with horses he bought at breeze ups – Blue De Vega and Now Or Never.

The latter wound up racing in Australia as Now Or Later and won the Group 2 Blazer Stakes in 2017.

“I was in bad form at the time thinking I should have won but it was a big achievement,’’ he said.

“I’ve nearly trained 100 winners which I think is hard to do in Ireland.

“We only race two or three days a week and every time we turn up in a race we race against Aidan O’Brien and now Joseph O’Brien who is turning into a superpower.’’

I Am Superman will be partnered by his regular rider Leigh Roche in the Golden Eagle and O’Callaghan sees it as a plus given Roche rode in Sydney for a season in 2016-17 and has ridden at Rosehill.

It’s expected Roche will put I Am Superman through his paces in a final gallop at Canterbury later in the week.

The entire is a $51 chance in TAB’s all-in market prior to the final field and the way O’Callaghan talks about him he might surprise a few.

“He’s a little bit quirky, he’s raced a bit enthusiastically in his races and if you put him in the wrong place at the wrong time he can light up,’’ he said.

“In the lesser grade races he’s been handy and gone to the front, when he was learning that was the best place for him to relax. I don’t think we’d be ballsy enough to drop him out.

“Generally he’s just getting behind with a bit of cover then he quickens off the bend. If you ride him like that and he contains himself he has an electric turn of foot.’’

If I Am Superman does relish his Golden Eagle task and race up to his trainer’s hopes there’s a good chance he could stay in Sydney for The Championships and perhaps be a lightweight Doncaster contender.

He does hold an invitation to the Hong Kong Mile in December so that’s something to consider.

“I’m going to meet a couple of trainers when I’m there and make a decision if I’m going to leave him there,’’ he said.

“If he can mix it with your horses it might be the best bet even just for an autumn campaign.

“If he got a break and came back in the autumn there’s a lot of races to suit him. It mightn’t be the worst idea to leave him there for six months or so before he comes back for the Irish summer.’’

Racing NSW – your home of live racing, form, tips and the latest news.